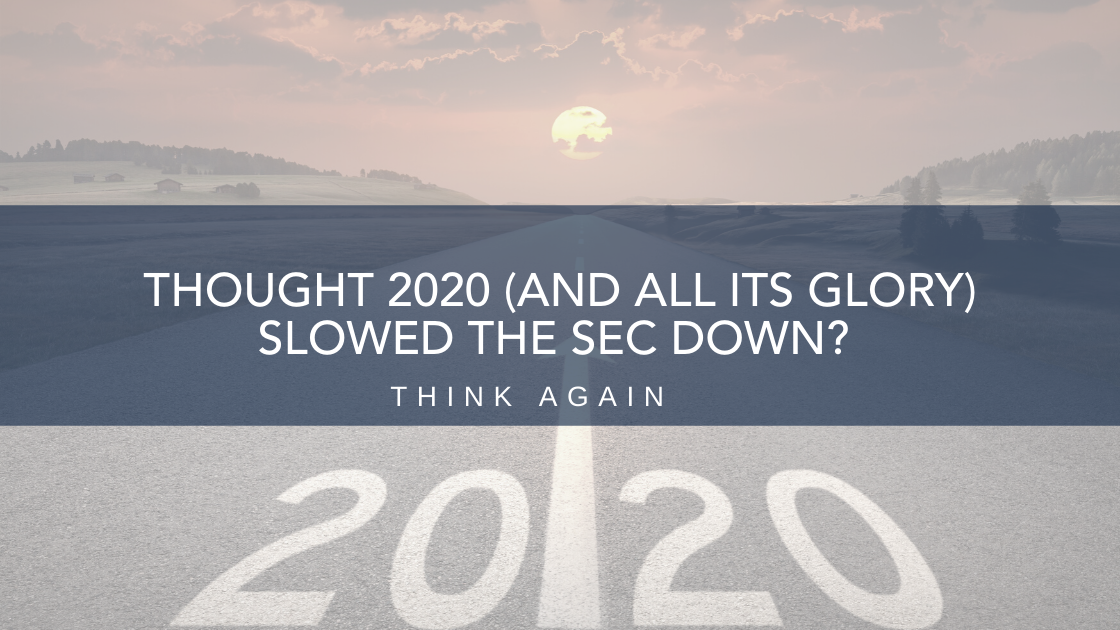 On November 2nd, 2020, the Securities and Exchange Commission (“SEC”) Division of Enforcement (the “Division”) released their 2020 Annual Report. Contrary to popular belief, amidst all of the curveballs that 2020 threw our way (including the pandemic), the Division had a busy, record-breaking year of “vigorously enforc[ing] the federal securities laws to protect investors and maintain the integrity of the markets.”

How vigorous you ask? In fiscal year 2020 alone, the SEC recommended 492 enforcement actions and 36 COVID-related trading suspensions, opened approximately 640 inquiries and investigations (over 150 of which were COVID-related), received and processed approximately 16,000 tips, complaints, and referrals, conducted numerous remote interviews, testimonies, and depositions, and conducted (and won) one virtual trial. And that’s just the tip of the iceberg. Let us give you a brief rundown on how busy the Division was in 2020.

Rather than derailing the Division off course, the COVID-19 global pandemic heightened the Division’s oversight and response to protecting retail investors by actively looking for misconduct. They focused investigating a wide variety of potential misconduct in the areas of microcap, insider trading, and financial fraud, and issuer disclosure. Against the backdrop of COVID-19, the SEC brought 715 enforcement actions. 405 of which were “standalone” actions; 180 of which were “follow-on” proceedings; and 130 were proceedings to deregister public companies who were delinquent in their SEC filings. Mind you, of these 715 enforcement actions, 492 cases (that’s almost 70% of the cases) were brought after the SEC instituted mandatory telework due to the pandemic.

The majority of the SEC’s 405 standalone cases in FY 2020 concerned securities offerings (32%), investment advisory and investment company issues (21%), and issuer reporting/accounting and auditing (15%) matters. The SEC also continued to bring actions relating to broker-dealers (10%), insider trading (8%), and market manipulation (5%), as well as other areas such as Public Finance (3%) and FCPA (2%).

In FY 2020, the SEC brought actions against financial institutions, automobile and engine manufacturers, and technology, telecommunications, and pharmaceutical companies, to name a few. These enforcement actions resulted in 475 bars or suspensions against market participants and suspended trading in the securities of 196 issuers. The SEC also charged individuals in 72% of the standalone enforcement actions it brought.

From the actions brought in FY 2020, the SEC obtained judgments and orders totaling approximately $4.68 billion in disgorgement and penalties – the highest amount on record. The breakdown of this massive $4.68 billion record was:

To put things into perspective, the median amount of total money ordered in FY 2020 was over $530,000. Of the $4.68 billion in disgorgement and penalties, the SEC returned $602 million to harmed investors; these distributions consisted of over 800,000 individual payments to investors from 91 fair funds and court-appointed administrators.

It’s worth noting, that in FY 2020, the Supreme Court issued an impactful decision relating to disgorgements and penalties. In June 2020, the Supreme Court in SEC v. Liu affirmed the authority of courts to order disgorgement through their power to order “equitable relief” under Section 21(d)(5) of the Exchange Act. As a result, there have been and will continue to be changes in the balance between the penalties and disgorgement that the Division seeks and recommends to the SEC. Among other things, the Division may recommend higher penalties in some cases where the statutory scheme permits them to do so.

The SEC owes much of their success in 2020 to whistleblowers and those who provided them with the tips, complaints, and referrals (the “TCRs”) necessary to guide them to an investigation. The Division processed approximately 23,650 TCRs – a substantial increase over the approximately 16,850 TCRs they received in FY 2019. Even better, the SEC received a majority of these TCRs during the pandemic. Between mid-March and the end of the fiscal year, the Division triaged approximately 16,000 TCRs, a 71% increase from the same time period in 2019. From these 23,650 TCRs, the SEC opened 1,181 new inquiries and investigations in FY 2020; 640 of which (that’s 54% of the cases) were opened between mid-March and the end of the fiscal year, a 7% increase over the same period in FY 2019.

As of the end of FY 2020, the SEC had awarded 106 individuals approximately $562 million as a part of their Whistle Blower Program. Of these 106 individuals, the SEC issued approximately $175 million in total awards to 39 individuals. This represents a 200% increase in number of individuals awarded in a single year (again, during the year of the pandemic) over the next-highest year. In the brief time since FY 2020 ended, the SEC’s Whistleblower Program continued to break their previous records, and the SEC issued the largest award in its history – approximately $114 million to a single whistleblower on October 22, 2020.

During this trying year, the SEC was able to shorten their median time to complete their investigations from 37 months to 34 months and recommend enforcement actions to 21.6 months, a 5-year best record. An example of swift action the SEC provided in their report was a recently filed district court action against the co-chair of the unsecured creditors committee in the Neiman Marcus Group Ltd. LLC Chapter 11 bankruptcy proceedings. The SEC filed its action within five weeks of the alleged misconduct.

The SEC’s Focus on Investment Professionals

The Division continued to prioritize identifying misconduct that occurs in the interaction between investment professionals and retail investors. As investment professionals occupy positions of tremendous importance to those who entrust them with their children’s college funds, their retirement funds, and other savings, they have a heightened duty and responsibilities they must uphold.

One such responsibility – long recognized under federal law – is an adviser’s fiduciary obligation to disclose to their clients material conflicts of interest. Disclosure of such conflicts remains a priority for the SEC. The SEC concluded their Share Class Selection Disclosure Initiative during FY 2020, which resulted in the SEC ordering nearly 100 investment advisory firms, that voluntarily self-reported to the Division, to return more than $139 million to investors.

Another potential undisclosed conflict can include advisers’ use of cash sweep arrangements. Cash in advisory accounts is often automatically swept into a money market mutual fund or a bank deposit sweep program. In some cases, an adviser that is either dually registered or has an affiliated broker-dealer, has a conflict of interest in recommending one cash investment over another because it receives revenue sharing payments from its clearing broker when selecting particular cash sweep products. Just as with mutual fund share class selections, advisers recommending or choosing between different cash sweep products must make full and fair disclosure of these types of conflicts.

Another potential area of concern is the transparency of fee structures around advisory clients’ accounts. For example, “wrap fee programs” offer accounts in which clients pay an asset-based “wrap fee” that covers investment advice and brokerage services, including trade execution. In May 2020, the SEC found that Morgan Stanley Smith Barney had disseminated marketing and client communications that gave the misleading impression that wrap fee clients were not likely to incur additional trade execution costs, even though the firm’s order routing practices resulted in some instances in the clients paying additional transaction fees that were not visible to them. In settling the charges, Morgan Stanley agreed to pay a $5 million penalty and create a Fair Fund to distribute the penalty moneys to harmed investors. Here are some other noteworthy enforcement actions that took place during FY2020.

Pandemic. Schmandemic.  It has not slowed down the SEC. It has presented the SEC with an opportunity to be more diligent and efficient in their work. They examined 15% of all registered firms!

With more firms forced to allow advisers work remotely, it is crucial to review your policies and procedures and ensure that you have consistent and thorough supervision.

Call us today to schedule your complimentary consultation.

The complete publication is available here.

Ready to get your Time Back? Schedule Your

Requesting a free report or viewing the information available on this website does not create an attorney-client relationship with My RIA Lawyer, Shaver Law Group, LLC or any of its attorneys. To obtain legal advice about your RIA matter, please engage the services of this law ﬁrm or another attorney of your choice. To discuss engaging our ﬁrm to help you with your RIA matter, please contact the ﬁrm by phone or by submitting an email request through this website.